Yakov Isidorovich Perelman was born in Bialystok (it isin Poland now) on December 4th, 1882. In 1901, having entered St.Petersburg Forest Institute, he moved to St.Petersburg, and thus his further life was closely connected with this city. In 1913, his life changed suddenly when his book was first published at P.P.Soikin’s Publishing House... 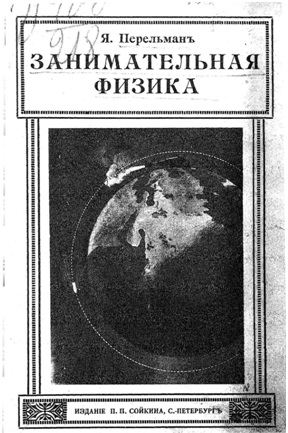 If you just ask those who are engaged in exact sciences professionally – physicists, mathematicians, engineers, designers, “Where did your interest to your present occupation come from?”, at least half of them will answer, “From the books by Perelman, of course.” You can simply ask the latest Nobel Prize winners, physicists Sir Andre Geim and Konstantin Novoselov, when their interest to physics appeared. And each of them will say, “When I opened “Physics for Entertainment” for the first time.”

It takes a great talent to write about complicated thingsin plain language. Can a needle float in a glass of water?Why can’t they use unbroken rails for a railroad track?Why is it so that angle of incidence equals angle of reflection after all? Why is water wet and the sky blue? Many people found simple answers to those complicated questions in the books by Perelman. And having found them, they started asking their own questions, thus advancing science and knowledge.

It is amazing, but Perelman was not trained as a physicist. He graduatedfrom Forest Institute and was actually a forest engineer. And his first book “Physics for Entertainment” was meant for a “wide circle of people”. Nowadays, we would call it “popsci”.However, professional physicists quickly understood its merits too. “We have enough of forestry specialists, but we do not have anybody who can write about Physics the way you do it. So, I strongly advise you to keep on writing that kind of books by all means.” (O.D.Khvolson, professor of St.Petersburg University).

Well, Yakov Isidorovich kept on writing, and both scientistsand poetsare really grateful to him for that.

Over a dozen books, hundreds of reprints and over a dozen translations into different languages, that’s what is hiding behind the words “an amazing Yakov Perelman”.

By the way, writing was not the only thing he did. He worked in a famousGroup for the study of Rocket Propulsion Systems. He was one of the founders of the Leningrad EntertainingScience Club opened in Sheremetievsky palaceon Fontanka river in 1935.And that’s not all; many more other entries can be added to his biography.

You may find it surprising, but the idea of changing to summer time in order to save fuelwood resources also belongs to Perelman. He spoke about it as far back as1916.

And here comes some more physics:with the outbreak of the Great Patriotic War,Perelman started lecturing intelligence agents and future guerrilla fighters on how to find the way in unknown surroundings without any equipment. 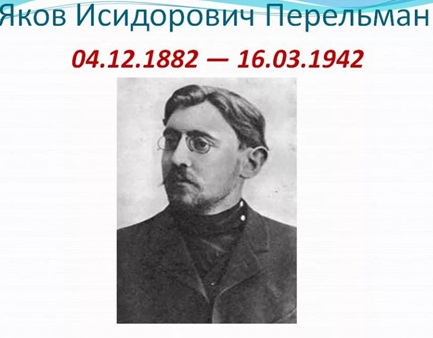 It is a fantastic biography of a fantastic man, “fantastic” meaning not only “very good” but also “very unusual” and perhaps a little “imaginary”, because it is hard to believe that such a man could exist. It’sas if he wasa kind of a “science-fiction man”. And, by the way, it was he who introduced a Russian term for “science-fiction”!

His son Mikhail, graduate of the Mathematics and Mechanics Faculty of Leningrad State University, was killed in action in 1941. His wife Anna Davidovna Kaminskaya-Perelman, who was a doctor, died while being on duty at a hospital in besieged Leningrad on January 18th, 1942. Yakov Isidorovich Perelman died of emaciation on March 16th, 1942. He was buried in a mass grave in Transfiguration cemetery.