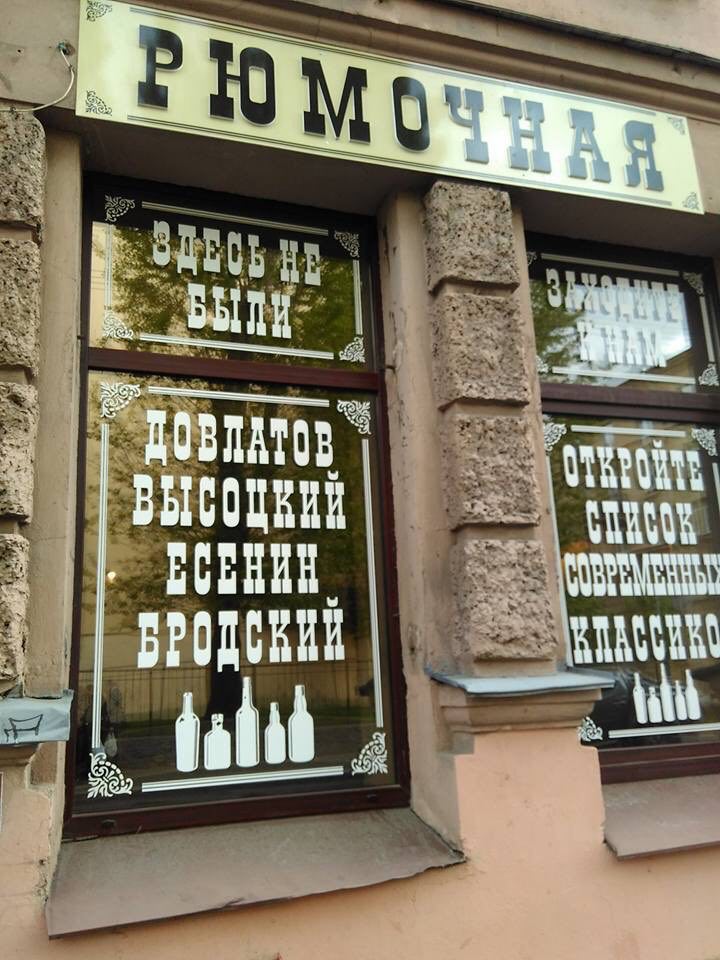 Yes, right, let’s go back to eternal things: difference in pronunciation between Moscow and St.Pete, “bordiur vs porebrik”(a kerb), “vodolazka vs badlon”(a turtleneck), “skhod-razval vs razval-skhozhdenia” (the wheel alignment) and “shaverma vs shaurma” (a döner kebab)!

It may seem that we have had all those differences from time immemorial, so to say, but, fortunately, this is not so, the list keeps expanding nowadays. And that is natural, as new objects and phenomena continue to appear in our life, and they require new names! So here is the story.

It happened in the past, let’s say, twenty-something years ago. There lived a man and a woman in Moscow.

They had a quite serious relationship;however, they were not officially married yet. And it is a small but important artistic detail.

So, onedaythey came to St.Pete. They got off the train in the morning, checked-in at a cosy hotel and went out to have breakfast. Theydropped into a nice dive bar.

I simply adore those dive bars in St.Pete!Unfussyand low-budget, a kind of a “three-in-one” place: a diner, and a café, and a barroom. Justtherightplaceforan ordinary man to drop by after work,so that he could have his 150 ml of liquor and a plate of pelmeni (dumplings) without having to pay a fortune. You can hardly find such a place in Moscow, as everything is mostly for wealthy people there.As regards budget dining,… An immortal quote by Ranevskaya comes to mind: “There is an ass, but there is no name for it”, only as regards dining in Moscow it is the other way round: there is a name “a dive bar”, as for dive bars themselves…. Well, I will talk about it some other time, and in the meantime….

In the meantime, the man and the woman from Moscow were having breakfast. And at a nearby table, there was sitting a middle-aged man, who was not just having breakfast but was mostly occupied with dialing phone numbers from his address book on his mobile phone and advising every one of his contacts,

Andthenhedictated the figures. The guy really looked something.

After the 4th or 5th call, the woman from Moscow finally understood what he was saying. Shelaughedsoftlyandaskedhercompanion,

“What? Whatdoeshe want from them? What kind of “truba”number do they have to put down?

And then the man from Moscow finally got it.He used to hear about it before from the stories told by other people, but never in person.

The explanation turned out to be quite simple. Mobile phones were only going to become a part of our everyday life then. So, when somebody acquired a mobile phone, the first thing they did was call their friends and acquaintances, who already had their mobile phones, and proudly advise them the newly acquired mobile phone number. And what was then called “mobila” (mobile phone) in Moscow, was called “truba” (mobile phone) in St. Pete! Now we have“mobilas”/”trubas” almost from the time we are born, but back then buying a mobile phone was something really important.

“Obviously, he bought his first “mobile” (mobile phone)”, advised the man to the woman, “Now he is calling all his contacts to give them his new phone number”.

“Great”, - said the woman, “Now I am not at all sorry that I got involved with you, and that I even agreed to go to St. Pete…”

And moreover, the woman from Moscow liked the expression so much, that she was calling her friends almost the whole day, happily informing them, “Lena! I’m in St. Pete. Quickly put down my “truba” number! Natasha! I’m in Nevsky. Quickly put down my “truba” number!”… and so on. By the way, it was not at all cheap, as intercity roaming cost a fortune back then!

And more than that, even when they returned to Moscow, she kept the habit. And when she was talking with somebody nice and understanding, she offered them to dial her “truba” (and not “mobila”) number!

This story has a happy ending! The man and the woman soon got married. They now have kids. And the word “mobila” is almost never used these days, as nowadays we have smartphones, “i-phoneys” and “androids”. And there is no need to put down phone numbers anymore, because our smartphones record all the information for us, and then send it to everyone whether we want it or not.