Attentive and discerning readers will be sure to contradict, “Isn’t the Moscow metro enough for you? Everybody knows thatthe Moscow metro has the most beautifulstations in the world, but don’t you have enough of its everlasting rush, throng, lack of fresh air and “administrative liability for staying in carsthat areheaded for depot…”

Here is my reply. You just have to know how to use it. For example, you have to know how to choose the right time. And then there will be no depot… You know, Viktor Tsoi was singing in one of his songs, “I woke up in the metro, when they were turning off the light, a man in a red hat woke me up…” Anyway, have a read of my first story.

When I was a little boy, we were living very close to the metro, which was within a 5-minute walk. There were colourfulcash-to-coin change machines in the metro. Sometimes I was entrusted with that demanding task. Having to change 20 kopecks into 5-kopeck coins was my favourite. I would come up to the red machine, stand on my tip toes, reach out and insert 20 kopecks into the slot. And almostimmediatelya handful of 5-kopeck coins would jump out jingling merrily, some of them could even jump on the floor! It was pure happiness! I was thinking that when I grow up and start working, I would receive my salary and change it into 5-kopeck coins right away!

Sadly, though, I hardly ever did it, because children under 7 did not have to pay at all, they just went in past the assistant on duty. Surely it was money-saving, but ever so boring. There was no excitement in it at all. I would just go by, as if I did not exist. And every time I did that, I wished I could grow up sooner and become 7 years old. Then I would get my 5-kopeck coin and drop it into the slot and proudly go through a turnstile like a big boy…

That was it. Then I grew up and started getting my 5-kopeck coin. But one day they introduced a school travel pass, called “travel card” in St. Pete, and I had to go past the assistant on duty again. And then there appeared metro tokens, and shortly after that everybody changed over to using electronic payments, which almost forced banknotes and coins out of circulation.

Butsomewhereinside me there is still that feeling: metro – coin – you are a big boy now, hurray! AndeachtimeI drop it into a turnstile….

My point is that youcanstilluse tokens to enter the metro in St. Pete! Imean, contactlesspaymentexists too, ofcourse, for the convenience of passengers, but you cannot yet “pay by your face” like in Moscow. Though, I believe thatthat method of payment will soon come to St. Pete too, as progress cannot be stopped. 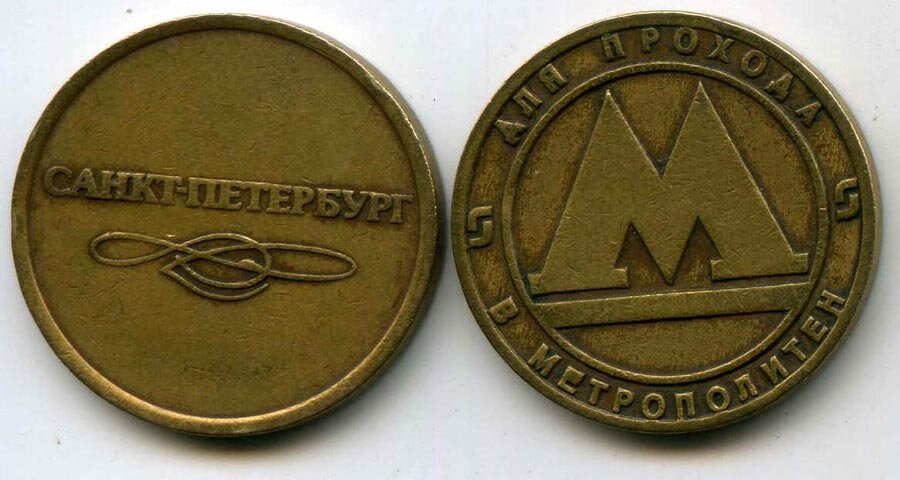 But, to tell the truth, I always buy tokens. There is something magical about it, something which comes from my childhood. I cannot describe that feeling, but it stays deep inside my heart. And here I go again, up to a fairy-tale creature of a turnstile tomake it happy with a coin. I am a big boy now, so off you go to the new adventures!

Well, that’s the story. Startingwith December 29, 2021 one token to St. Petersburg metro costs RBL 65. For convenience sake, and also in order to save time and money of the passengers, especially those from Moscow, 1-day, 3-day and 5-day travel passes as well as various special rates are available. But as for me, I am going to buy metro tokens next time anyway.

And as for the guests at the Catherine Art Hotel, they can reach “Nevsky Prospect” and “GostinyDvor” metro stations on foot in just 3 minutes.

As regards guests of the Moskovite’s Blog, they will soon have further opportunities to read about St. Petersburg metro, escalators, platforms, trains, “Be careful! Thedoorsareclosing!” andmanyotherthings!