I am a big fan of Vladimir Semyonovitch Vysotsky, to say the least. Actually, I have been one since I was a kid, because it all started with listening to a great record “Alice in Wonderland”. And while I did not even know then, that it was Vysotsky who wrote all the songs for the record, and that the idea to make the record belonged to him and his friends, I was listening to the songs of Parrot and Orlyonok Ed, voiced by Vysotsky, practically non-stop, so much so that the needle was bouncing on the record every time I was playing those two tracks! “Hey, everybody, listen to me, I am the Parrot – a Pirate of the sea!..”

We also had a very small record at home– an “EP”. There were only 4 songs, but all of them were great: a hilarious song “Утренняягимнастика” (The Morning Exercise) and lyrical songs “Корабли” (The Ships) and “Вхолода, вхолода... “ (Into Cold). Even for a 7-year-old boy it was absolutely clear that the songs were super. And amazingly, Vysotsky singing in “Alice” happened to be the same Vysotsky who was singing “Корабли” (The Ships)! What a talent! And besides, it turned out that he was also playing a brave Zheglov in the film we all knew so well!

And one day, I learned that he had died…And that he died very young.

But then, there appeared at home an LP record with a lot of great songs, and all of them were very different. There were serious songs about war and lyrical songs, and really funny ones.

And then the time has come to discover Vysotsky recorded on magnetic tape.

I was even a little frightened at first when I heard it: come on, what kind of lyrics are those: “In the city of Leningrad, at Five Corners Place Sanya Sokolov got punched in the face…” or “If you keep on drinking vodka at a party…”. Is it hooliganism, or what?

But I quickly got it straight. And every new cassette of songs by Vysotsky that appeared at home was played until it started hissing and the tape got tangled.

Well, the song about an unfortunate Sanya Sokolov was one of my first songs on magnetic tape. But, I was not quite sure what “Five Corners Place” was.So, for some reason, my imagination filled my head with angles from some geometry test! And Sanya Sokolov was standing between those angles as if he was a cartoon character, a kind of “oneand a half diggers*” (*an allusion to a well-known Soviet cartoon) 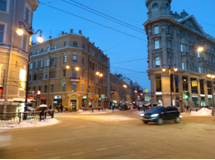 And then I got older and found out that Five Corners in St.Pete was nothing else but a place where there were five corners. At a regular intersection, two streets cross each other and thus there are four building corners. And in St.Pete, there is a very interesting place where two streets (Lomonosov Street and Rubinstein Street) and Zagorodny Prospect meet. The place is called Five Corners, because they are really five.

What an extraordinary place! I was eager to go and see it during my first time in St.Pete (it was Leningrad then). All the more so, that in Moscow there was nothing of the kind…

There used to be Five Corners in Moscow too, Sobachiya Ploshchadka Square, but it was ruined long ago, when Kalininsky Prospect (now called Novy Arbat) was being built. There is still Lyalina Square not far from Kursky Railway Station. But, obviously, due to the fact that none of the celebrities got punched in the face there, the place is not at all famous, unlike Five Corners in St.Pete.

You may find it interesting: not far from Five Corners there is a Lensoveta Drama Theatre, where a still very young Vysotsky, being a graduate of the Theatre Institute, showed up at auditions. He also attended auditions at the Komissargevskaya Drama Theatre and Leningrad Youth Theatre, though, eventually, he never became a stage actor of any drama theatre in Leningrad. But maybe it was then that the idea of a “sketch-song” came to him!

And there was another thing that I could not understand then - “If you keep on drinking vodka at a party – though unwilling, you will go to the parking”. Lateron,Iclearedthatuptoo: in Soviet time, taxi drivers were also selling liquors at night. So, ifyoulet the kids listen to those songs now, they will not understand anything at all, and you will end up explaining everything. But that’s another story. 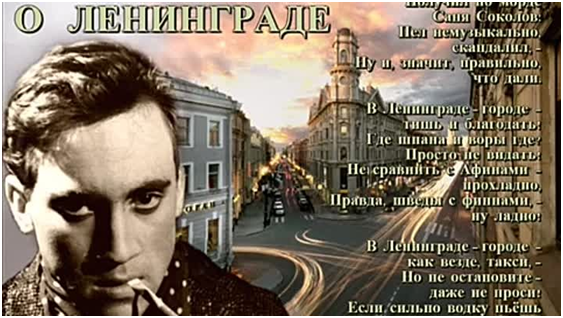 As regards this story, it is about an interesting place in St.Pete that is called Five Corners, and there are five of them indeed! So, one day a Sanya Sokolov got punched in the face there for unmusical singing and outrageous behaviour. But now we know thata small incident can turn into a small chefd’oeuvre at the hands ofatruePoet like Vysotsky.