In fact, Moscow and St.Petersburg fans do not exactly love each other. Though, I personally, as a Moscovite, think that, “That is in the field that we are rivals, but we are friends in everyday life”. As for sportsmen,…

The friendliest match between “Spartak” and SKA (Central Army Club) took place in November, 1995. And it was preceded by the most extraordinary combinationof circumstances that happens, as they say, once in a hundred years.

In that season, The National Ice Hockey Championshipwas held according to quite a complicatedformulawith a preliminary and a subsequentrounds followed by the play-off.Before the final game of the preliminary round, there were three teams who qualified for the last two passes to the next round: “Spartak”, SKA and “Krylya Sovetov”. The last game was going to be between SKA and “Spartak”, and, significantly, both teams would be quite satisfied if the game ended in a draw!But, more significantly, none of the teams wanted to lose, because the loser would be movedto the bottom position in the standings and thus would be out of contention for the pass to the next round, and the second pass would then go to “Krylya Sovetov”.

So, the task of the two teams was crystal clear: they just had to play their most beautiful ice hockey and present the fans who gathered in the stands of the Palace of Sport “Sokolniky” with a real Ice Hockey Festival.

It was a festival indeed. In the second intermission, the opponents headed for the locker rooms, having scored 2:2, which suited both teams just perfectly. However, in the third period

Something went wrong. A very young forward Maxim Sushinsky, a future idol of the fans in St.Pete (and in Omsk too), nicknamed “Su-33”, caused quite a stir. The goaltender of the Moscow team Alexei Ivashkin did his bit too. He was famous not only for being a brilliant goaltender, but also for frequent and audacious violations of the sports regimen. And sometimes, that prevented Alexei from putting in a hundred percent of his skills and energy. So,after a couple of ridiculous ricochets, a bad move of the goaltender and a hockey butterfly, the puck was in the net and the score was 3:2 in favour of SKA.

MaximSushinskydid not receive any traditional congratulations from his partners, but was close to getting stabbed in the ribs with a stick instead. And somewhere up in the stands somebody said loudly, “Hello, young man! What are you doing?” 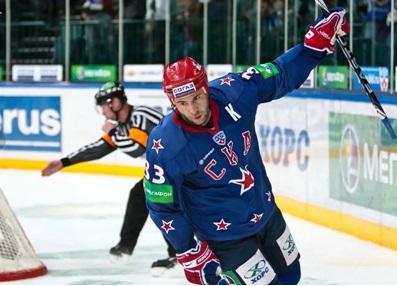 The situation required immediate correction, there was still time. But unfortunately, there are days when the puck just would not go into the goal, so to say. Itjustwouldnotgothere despiteajoint effort by the players of both teams, andthat’sit. And nearlyat the last minute of the period, theyfinally made it – a veteran of the red-whites Igor Mishukov practically pushed the puck behind the line in the commotion near the goal.Havinggot the desired 3:3, all the opponentsbreathed sighs of relief, exchanged warm handshakes andskated up to the stands to thank their fans for a great support. Russian fans call it “суппорт”(support). As for “Krylya”, well, “Krylya Sovetov”, as if in opposition to its name (“Wings of the Soviets”),never flew. Butit’sa sport, somewin, somelose. The one who wants it more wins, or draws (as was the case).

So, that was the friendly match that took place in November, 1995.In the following round, the fates of “Spartak” and SKA developed differently, but that will be another story, of course.