Ilearntaboutmany, shallwesay, iconic sites on the map of St.Pete when I was still a child and St.Pete was still called Leningrad. Not only did I learn about them, but I also came to respect them then.

When I was a boy, I had a Dream. I mean, when you are a little kid, you have lots of Dreams, because it is so easy to daydream when you are a kid, much easier than when you have grown-up. Well, oneofmydreamswastolearntoplayPréférence well one day.

And that dream did not occur for nothing. Once I found out from the stories told by the eldersthat being a good Préférence player was a sure sign of being a really smart man (you do want to be smart, don’t you?); and that many students of goodinstitutes(like Moscow State University and Moscow Institute of Physics and Technology) had to necessarily play Préférence! (You do want to study at the Moscow State University, don’t you?)

And what is significant is that my dream came true one day. Iwas 12. My parents and Iwerestayingataholidayhome, where we came across a guy we knew, who loved playing cards. So, little by little, my dad and the guy explained the basic rules of“playinga pool”to the novice I was (it is better to have minimum three players for a game of Préférence – author’s note for those who do not know that yet).

One day, after I had mastered the basics of Auction, Play, etc., the guy even told me that there existed several variants of the game, some of them being “Sochi”, “Rostov”, “Leningradka”. That’s when you play seriously - for money.

“And the harshestone, in my opinion”, he said, “is the “Politech” version of “Leningradka”. And it is very interesting too. In fact, Leningrad school of Préférence is really good, and it is right at “Politech” (Politechnic University)”.

That’s how I came to know about Leningrad “Politech”, where, obviously, very clever people studied. Well, but of course, there were the best Préférence players, if I got it right! That’s when I started feeling a deep respect for Leningrad “Politech”.

“So, if you decide to play Préférence when you grow up, think twice before playing with anybody from “Politech”. If you are not sure of yourself, don’t even start!”

Well, I have not reached an advanced level as a Préférence player, but I have learnt the main principles, which is not bad at all. “Do not play if you can’t; do not play if you don’t have a good card; do not join the game if you don’t have money”, and a fundamental one - “It was not for playing cards that father was beating his son, but for wanting to win his money back”.

I learnt what“strong players” and a real”harsh game”meant when I was a second-year student. We were working at a “kolkhoz” (collective farm) then, helping potatoes harvesting. There were some guys from another faculty and lots of spare time (we were not going to actually harvest, weren’t we?), so playing a game of Préférence was one of the things we did to kill the time. Actually, we knew those guys, but not asPréférence players. And yet I knew that they played well and that they even visiteda club of Préférence playersat the Moscow State University “MechMath” (Faculty of Mechanics and Mathematics).So, what I am trying to say is that we were playing just to pass away the time, because if we had played at the usualrate of 1 kopeck per a trick, I would have lost my monthly student scholarshipin just one evening, even before it got dark actually.

In fact, it did not look like a traditional game of Préférence at all:

It did not seem to be a game in the usual sense of the word: we would deal, bid, take up the talon, open cards almost immediately and then score the game at once. No throwing cards on a green cloth (in our case – on a green blanket). Becausethemastersknewrightaway who played well and who played badly, and how badly.

Yes, butwhat was clear to them, was not clear to me. Only where I personally would hardly venture to play “six”, the guys confidently took “eight”. And where I thought “seven” was just right to win, I quickly “lost a trick without three”. The scale of the disaster is obvious even to those who do not know all the subtleties of the game.

Later, when we were just chatting about different things, I remembered and asked:

“Listen, guys. Is it true that “Leningradka Politech” is the harshestgame of all?”

“Well, surely it depends on the style one prefers. But on the whole, yes.They arereal strong players in Politech. Believe me.” 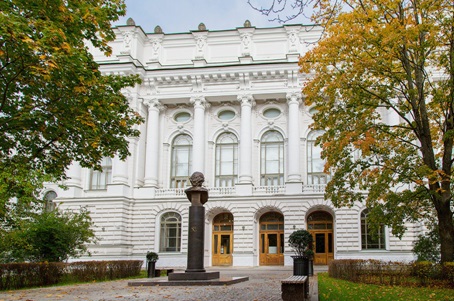 It was then that I feltreallydeep respect for Politech. And when I first saw it, I thought, “That’s where the really smart guys study. Better not sit down to play with them, if you are not confident enough”.

St.Petersburg Politechnic University was founded in 1899. Themainfeatureof “Leningradka” as a game system is an extremelyharsh play of those aiming to win tricks.

From Moscoviteto St.Pete and its inhabitants with love