“What’s the address of the legendary café “Saigon”

Obviously, one of the most frequently asked questions of the visitors to St. Petersburg is “What’s the address of the legendary café “Saigon”, can I visit it today?”. And it does not matter if those who ask the question are interested in literature or rock-music, as almost everybody heard about “Saigon”.

So, here comes our answer. Sure, the address is 49/2 Nevsky Prospect, corner of Nevsky Prospect and Vladimirsky Prospect. “Saigon” is not the only legendary place in St.Pete, but it is probably more legendary than the others. And, of course, where else could it be if not in Nevsky! As regards visiting it today, we will let you know a bit later.

In 1881, a still relatively young architect Pavel Suzor finished reconstruction of the building commissioned by its new owner, merchant Ushakov. The important thing was that it was the Emperor Alexander II himself who approved facade design. But both of them hardly imagined what kind of popularity awaited that place almost a hundred years later!As for Pavel Suzor, he had a lot to be proud of. During his career, he designed over a hundred buildings in St. Petersburg, including the famous Singer Building (please find the story about Singer Building in the “Excursions around Nevsky and Its Surroundings” section). 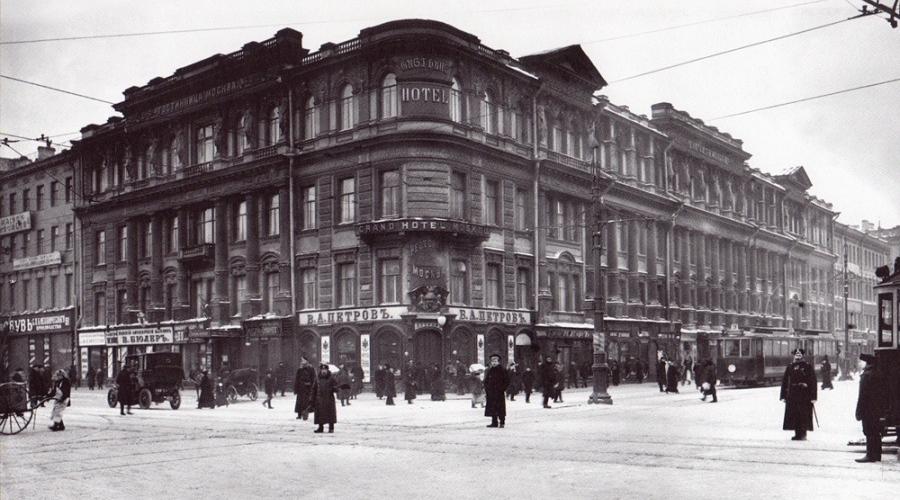 So, the building we know today has existed since 1881. However, the first building was constructed on the corner of Nevsky Prospect and Vladimirsky Prospect at the end of the 18th century. Mikhail Glinka lived there twice. And not just lived, but conducted his famous “Musical Fridays” more than once. And at the end of 1840, an aspiring new poet Nikolai Nekrasov lived, though briefly, in one of the apartments there. So, we can say that the musical and literary past of the place dates back to the middle of the 19th century, and that is quite a background.It should be noted that both before and after the reconstruction of the building by Pavel Suzorit was occupied by the “Moskva” hotel, which received its name from a nearby Moskovsky Railway Station. Among hotel guests there were Vassily Surikov and Anton Chekhov, which supplements the artistic background of the site.

But, of course, today’s legendary fame of the place owes much to “Saigon”. The first nickname of the cafeteria, opened in 1964, was “Podmoskovie” (under Moscow), which was quite natural considering its location under the “Moskva” hotel (literally speaking). And in the mid ‘70s, according to a canonical legend, there appeared the name “Saigon”. They say that one of the policemen, when reproaching cafeteria customers for disorder and smoke, uttered the words that eventually became immortal, “What a disgrace! It’s as if we are in Saigon here!” 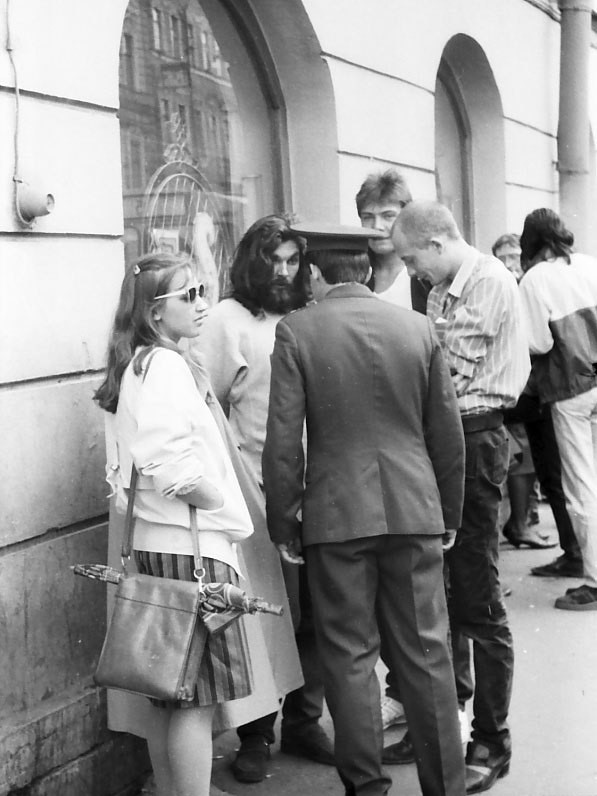 Today even middle-aged people would require an explanation. At that time, Saigon was a capital of South Vietnam, a stronghold of “international imperialism”. The war in Vietnam was ended with the storming and capture of Saigon, which were accompanied by the disorderly retreat of the infamous American military. After that, Saigon, having been renamed Ho Chi Minh City, has disappeared from the map of the world, but reappeared on the map of Leningrad.

So, who has been to Saigon? Literally everyone has - both the unknown people and those who eventually became famous. In the seventies, there used to gather the future flower of the Leningrad poetry and prose, Brodsky, Dovlatov and others in “Saigon”. By the way, Dovlatov did not like it there. We read about it in the memoirs of the contemporaries, and, besides, if he had liked it there, he would have portrayed some remarkable episode in his writings, but he did not!

And later, in the eighties, “Saigon” was closely connected with St.Pete rock culture and its representatives. It is nothing to be surprised about, as Leningrad rock club was located nearby, within just a 5-minute walk, at No13 Rubinstein Street.

You want songs, don’t you? “Saigon” has them!

You saw fire in my eyes, and your eyes said “yes!”

In “Saigon” she is buying me coffee

And she does not care what will happen to me…”

And coffee at a famous café will warm me»

(«Кино» (Kino)- album «Ночь» (Night), 1986. ThereisnodoubtthatboththemeetingsandthecoffeeawaitedViktorTsoinowhere else but in “Saigon”, as a more famous cafeteria simply did not exist) 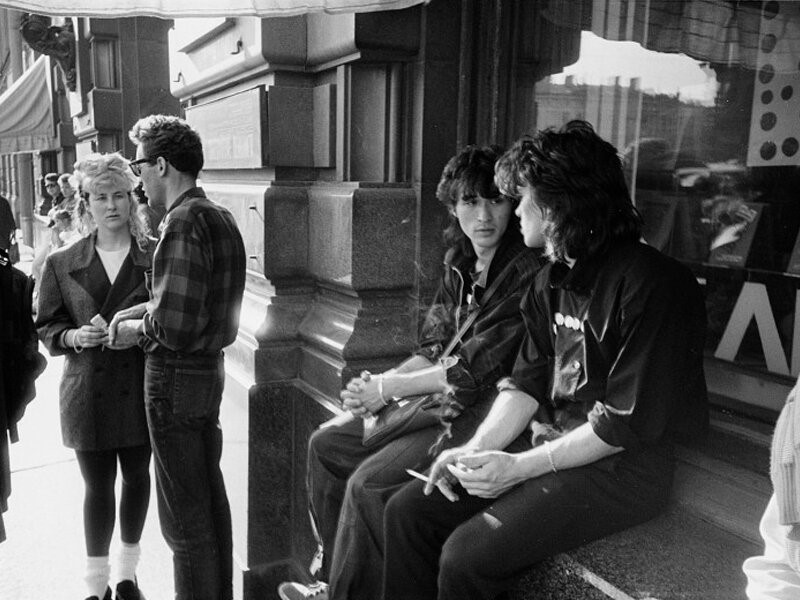 «A friend of my has new vinyl records

Yuri Shevchuk was not left behind either, though there was still time before he relocated to St.Pete. But it was already in 1983, when he was recording «Компромисс» (Compromise), that one of the songs was called «Онииграютжёсткийрок (монологвСайгоне)» (They are playing hard rock (A Monologue in “Saigon”). Andinthealbum «Оттепель» (The Thaw) they were singing:

“… Stoned Vasya and stoned Masha were standing by “Saigon”,they were trying to get money for a dose...»(Yuri Shevchuk and the editors advocate a healthy lifestyle -Editor’s note)

But, enough ofpoetic examples. Neither in St.Pete, nor in the whole world, one can find many places, quoted in songs so frequently! 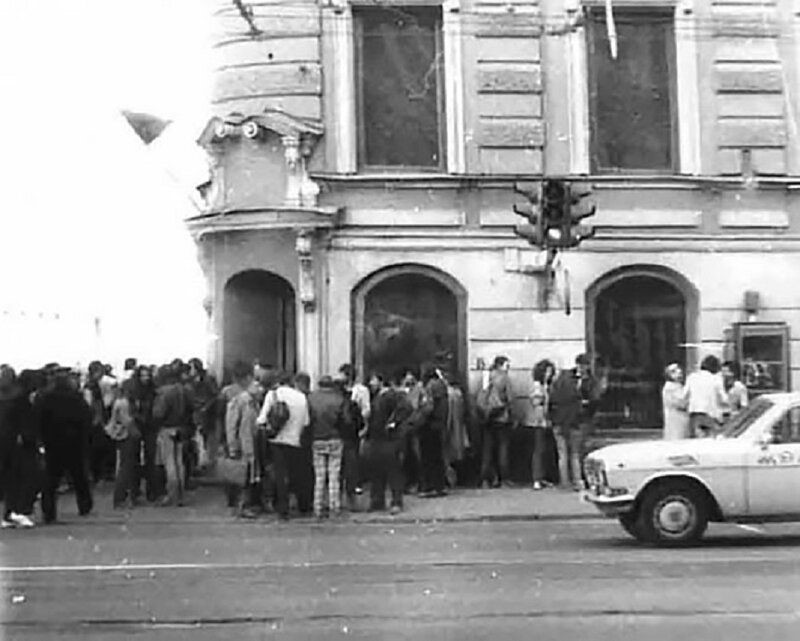 Andwhat happened next? A new day has come. At the beginning of the nineties, the legendary cafeteria was replaced by a luxury sanitaryware shop, which started various discussionsabout spiritual values being substitutedbypurely material ones…but that’s another story.

Nowadays there is another cafeteria there. So, it is the same place, but the atmosphere is completely different, and nothing but a sign on the wall reminds us about “Saigon”.Still, itis worth while to have a look at the former “Saigon” at least from the outside, when standing in Nevsky Prospect. That’s the magic of the place! It is no exaggeration to say that everybody used to visit it!

“We parted then, on the corner of all the streets…” («Аквариум» (Aquarium) - «Небостановитсяближе» (The sky gets closer). There is no sense in looking for references to exact locations in the songs by BG (Boris Grebenshchikov), but it is quite possible that the above is about “Saigon” too.)

Nevsky Prospect: every building is history.