When guests of the Catherine Art Hotel go out into Nevsky Prospect and, as usual, get dazzledby what they see around, many of them notice an elegant six-column portico on the opposite side of Nevsky.

“First of all, it is just beautiful!” And, as is usually the case withbuildings situated in Nevsky Prospect, it is really interesting too!

A long time ago, Dumskaya Street - and Perinny Portico is located right on its corner – was not called Dumskaya, of course. City Duma and the Duma Building appeared a little later. Actually, it was not a street at all back in the day. Originally, it was Glukhoi canal. When Gostiny Dvor was being built, the canal was filled in and turned into Gostinaya Street. Andsoon, akindofa “branch” ofGostinyDvor was put up next to it. ItwascalledPerinnyeRyady. Name “Perinnye” comesfromtheRussian word “perina” (feather bed). Although they did not sell feather beds there, but they did sell feathers in some shops, as feathers were the most popular filling for feather beds at that time. So, the name stuck. 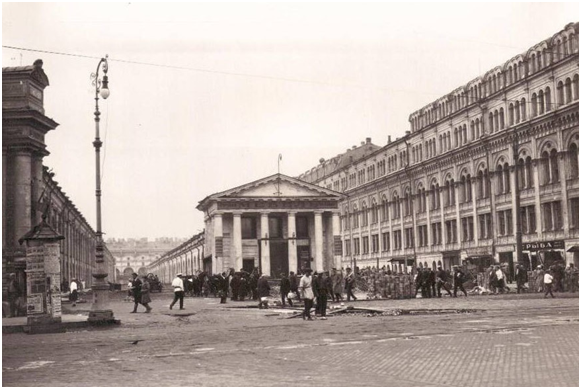 As guidebooks kindly advise us, “The portico elegantly completes the ensemble of Mikhailovskaya Street, which starts exactlyopposite it, on the even side of Nevsky…” “Elegantly” – absolutely right. “Completes” – maybe not quite right.

Historically, the ensemble “begins” with portico. Mikhailovskaya Street was designed by Rossi. Yes, it is the Rossi who designed “Architect Rossi Street” which is, no doubt, the most elegant street in St.Petersburg.Well, Perinny Portico was already there, when Rossi was creating his design of the Mikhailovskaya Street, and he certainly took the portico into account.

Well, the portico was not destined to “elegantly complete” the ensemble of the Mikhailovskaya Street long.In 1861, there appeareda chapelright in front of it. The name of the chapel was quite wordy– “Chapel of Christ the Saviour of the Guslitsky Saviour-Transfiguration Monastery”.It was beautiful too, butdifferent. Unlike the portico, which represented “Doric Classicism”, the chapelwas designed in traditional Russian style.

Alas, “Russian style” did not save the chapel, which was demolished in 1929. It was really difficult for a place of worshipto survive in the very centre of the cradle of the Revolution.

In 1963, Perinny Portico disappeared too. However, this time it happened due to transportation reasons, as a result ofthe construction of “Nevsky Prospect” metro station and the first underground crossing. Very soon, the underground crossing was nicknamed “Tyoply” (Warm) and immediately became one of the most popular hang-outs in St.Pete. But of course, it is always warm close to the metro, perfect for hanging outin any weather.

In 1967, in commemoration of the 50-ies anniversary of the Revolution there appeared a memorial landmark in about the same place where the portico used to be. It was an electrified map of the October armed uprising. And again, as guidebooks kindly advise us, “due to a certain resemblance, the inhabitants of Leningrad nicknamed it “Gniloy Zub” (Rotten Tooth)”. Well, nicknamed or not, but that was what it looked like. 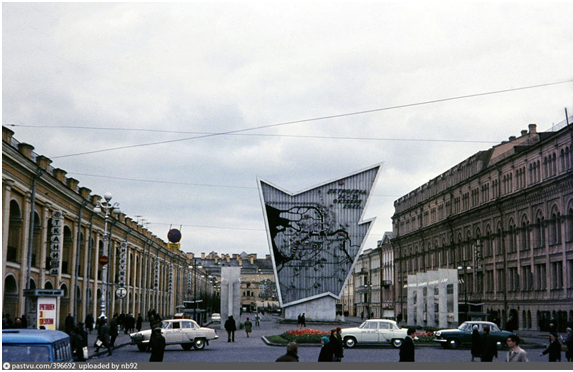 And then something interesting happened again, something quite unprecedented! For once during the Soviet rule, they decided not to demolish but to reconstruct an architectural monument!

So, designed by the architect Tolstov and the engineer Koman, Perinny Portico appeared in Nevsky Prospect again in 1972. Not quite where it was located originally, but the important thing was that it was there!Agoodexample alsocanbecontagious: at the end of the XXth century,the building of PerinnyeRyady was reconstructed too. It was more or less similar to the original.

At one time, the portico was occupied by a theatre box office. Knowing how difficult it was to get theatre tickets back in the seventies and eighties, there surely happened quite a lot of interesting things!

As regards Dumskaya Street, starting with 2019 it becomes pedestrian at weekends and on public holidays. Whatagreatplaceforapleasant and interesting walk!