Well, but of course, the first Russian “café-restaurant” was opened in Nevsky Prospect! Ithappenedin 1841…

It may seem kind of unusual, but there was everything in Russia. There were taverns and “czar’s pubs”, Peter’s assemblies, balls, dinner parties, salons, clubs and other places for passing the time, and not necessarily following the principle “Russian merrymaking is drinking…” Even chain bistros appeared to a great extent thanks to Russians.But as regards café-restaurantslike in Europe, they did not exist in Russia almost till the middle of the 19th century. A special law was required to open the first such establishment. The law was adopted by the Senate on April 11th, 1841.

Itis possible that,when approving the law, the Emperor Nikolai Pavlovich was thinking, “Well, we certainly were too slow with that issue. We are lagging behind Europe again. Weshouldhavedoneitlongago and thentheintelligentsiawouldnothavesatinthekitchensindulginginfreethinkingafterwork, butwould have enjoyed a civilized pastimeand we would have kept an eye on them.Or, letustakeforexamplePushkinandDantes: surely, anything can happen, but just imagine them going together to some nice place, ordering half a shtof each, sitting down and talking like two sensible men, off the record, just like Alex and George, and perhaps nothing bad would have happened…and now what. Well, anyway, better late than never.”

And a royal signature was put to the law.

That was how an establishment of a new type appeared at No 24, Nevsky Prospect for the pleasure of a high-class audience. Itwasestablishedbya Swiss confectioner Dominique Ritz-a-Port, hence its name - “Dominic”. 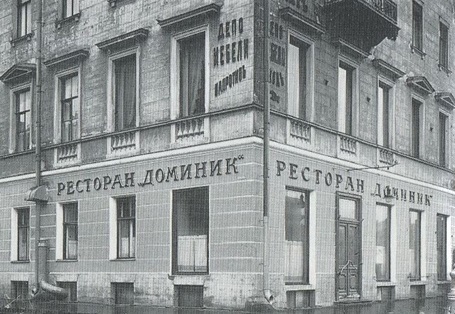 Business at “Dominic” quickly started to pick up. Its popularity, as we would say now, was huge. It is a wornout cliché, but one can hardly say better: the cream of the Russian cultural and scientific communities was proud to belong to the honourable“Dominican order” at different times. Dostoyevsky, Saltykov-Shchedrin, Tchekhov, Mendeleev, Repin, Makovsky… Many of them mentioned “Dominic” in their works in one way or another.

There were rumours, even, that Dmitry Ivanovich Mendeleev invented vodka especially for the purpose of making the pastime in “Dominic” stillmore enjoyable and interesting. Though that is a historical anecdote, of course. In fact, Mendeleev did not invent vodka, and that scientific work of his concerned other aspects. Even more so that of all the drinks he preferred Malaga and tea, especially tea, which he was very fond of. ”Oh, Dmitry Ivanovich: tea is not vodka, one cannot drink much of it!”, that was what his friend Fyodor Mikhailovich Dostoyevsky used to tell him often, according to witnesses.

Well yes, when we go to school, we learn about Dostoyevsky in our Literature course, and we learn about Mendeleev in our Chemistry and Physics courses, and generally, the materials in those courses never overlap. But as regards Dostoyevsky and Mendeleev, their paths crossed in real life, they were friends, and they owed their friendship, to a large extent, to their frequent meetings and discussions in “Dominic”. 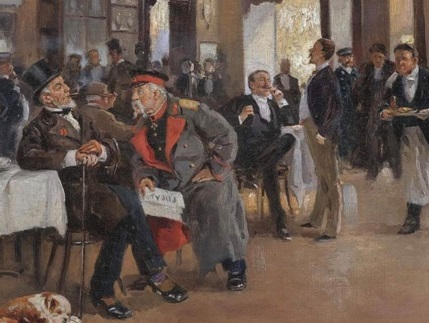 Anotherregular at “Dominic” was the founder of the Russian chess school Mikhail Ivanovich Chigorin. That’sbecause, traditionally, “café-restaurant” was at the same time a chess club then, and it was there that the best chess players polished their skills. They did it well too: Chigorin challenged the firstWorld Chess Champion Wilhelm Steinitz twice. Alas, both times, Mikhail Ivanovich did not win the crown, although there was only one right move left to win in one of the matches.

Well, one of the best reviews about his visit to “Dominic” was left by Mikhail Yevgrafovich Saltykov-Shchedrin. “Not even a quarter of an hour has passed, but it seemed to me that now was the perfect time to have some vodka!”And, as was always the case with the Russian classical writers, he hit the bullseye.

“Dominic” existed quite successfully until 1917.More importantly, traditions of public catering continued at No24, Nevsky Prospect in Soviet time too. Atonetime, there was a café known as “Lyagushatnik” (“frogs’ pool”), called so thanks to the green colour of the sofas. Nowadays, there is some legal advice office in that building. But that’s another story.

So, here we are, at No24 Nevsky Prospect. The first Russian café-restaurant “Dominic”, “…where we each had a rasstegai, a shot of vodka and a cup of coffee, and we pay for all that 60 kopecks” (A.P.Tchekhov)

Nevsky Prospect. There is history in every building.