Surely even those who are completely indifferent to shopping cannot fail to pay attention to Gostiny Dvor. By the way, quite a lot of people love shopping, even the majority of men do! Located in the heart of St.Pete, in the very centre of Nevsky Prospect, Gostiny Dvor has been engaged in a lively trade for almost two centuries and a half.

The largest commercial enterprise in St.Petersburg has not been started in an empty place. Wooden market stalls were put up on the corner of Nevsky Prospect and Sadovaya Street in 1737-38, after the first Gostiny Dvor had burned down. The latter was called Mytny, it was located in Nevsky prospect, where there is No 15 now, approximately.

By the way, as regards its name, the word «гость» ([gost’] – guest) used to have a kind of a different meaning in the ancient times. First of all, it was a merchant who came on his merchant business. “Sadko – a rich guest”. And it was later that the word acquired the meaning we know now. So, “GostinyDvor” meanstheMerchantsYard.

Obviously, wooden Gostiny Dvordid not meet the high standards of the capital city, and soon it was decided to builda more solid and fire-resistant construction.

However, the first project, designed by the architect Antonio Rinaldi and presented in 1750, was declined. The same happened to the second project, which was presented by Francesco Bartolomeo Rastrelli – yes, exactly, the one who designed Winter Palace. Andthefactwasthatthe merchants, who had a beneficial interest in the construction, considered the design by Rastrelli too lavish, too pompous and, finally, too expensive. “You know, baroque goes out of fashion, future belongs to classicism!” Well, there was a time when classical style was considered bold and innovative. 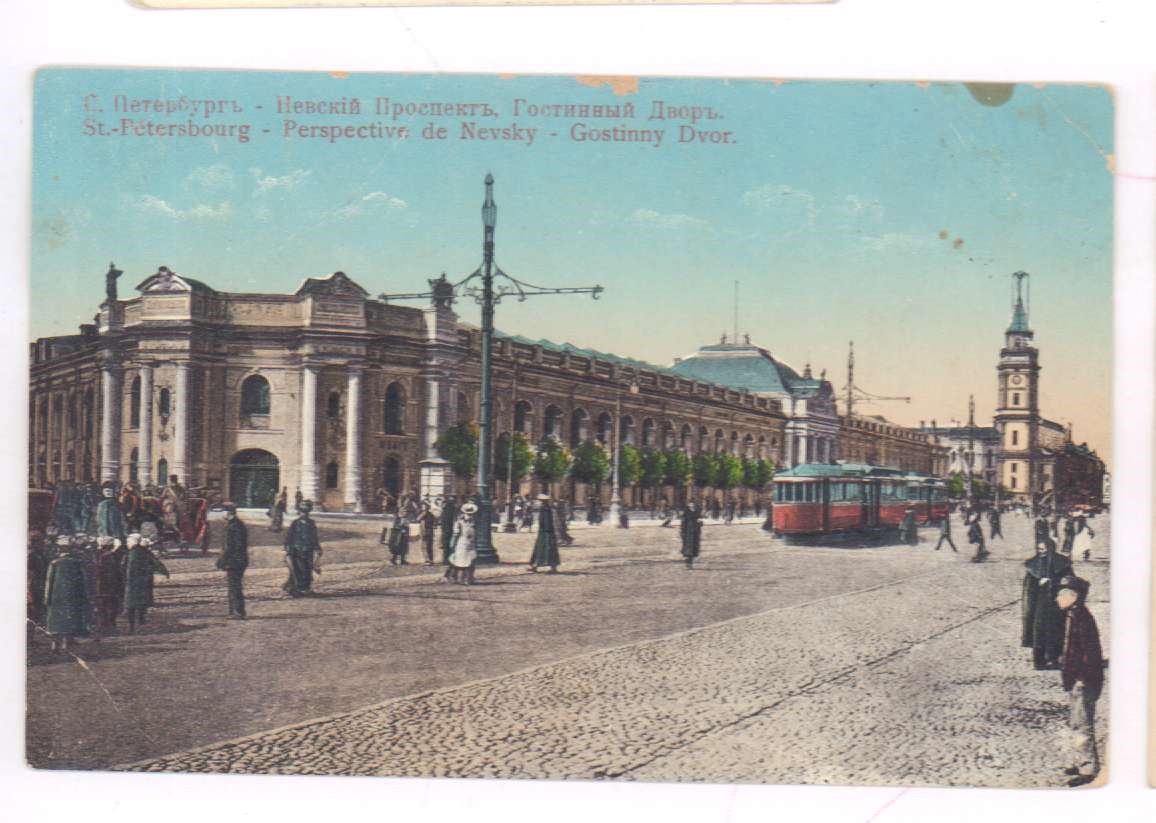 Listen, in fact it is not that easy to believe that the merchants really said that. One can say that Russian merchants’ “rich & pompous” lifestyle has passed into folklore. We all know those sayings “on a grand scale, the way a merchant would do it”, “it is indecorous to buy a tie for a thousand US Dollars, if you can buy it for three thousand just round the corner…”, and so on. Therefore, it seems strange that merchants considered the project “too pompous”!

Actually, the answer is quite simple. Originally, construction works were supposed to be funded by the Treasury. However, little time had passed before Empress Elizaveta Petrovna said “And what do the merchants have to say?” and suggested that the merchants share the expenses. She also reminded them about “corporate social responsibility”, or whatever it was called in the middle of the 18th century. That was when richly decorated design by Rastrelli suddenly seemed “over the top”. 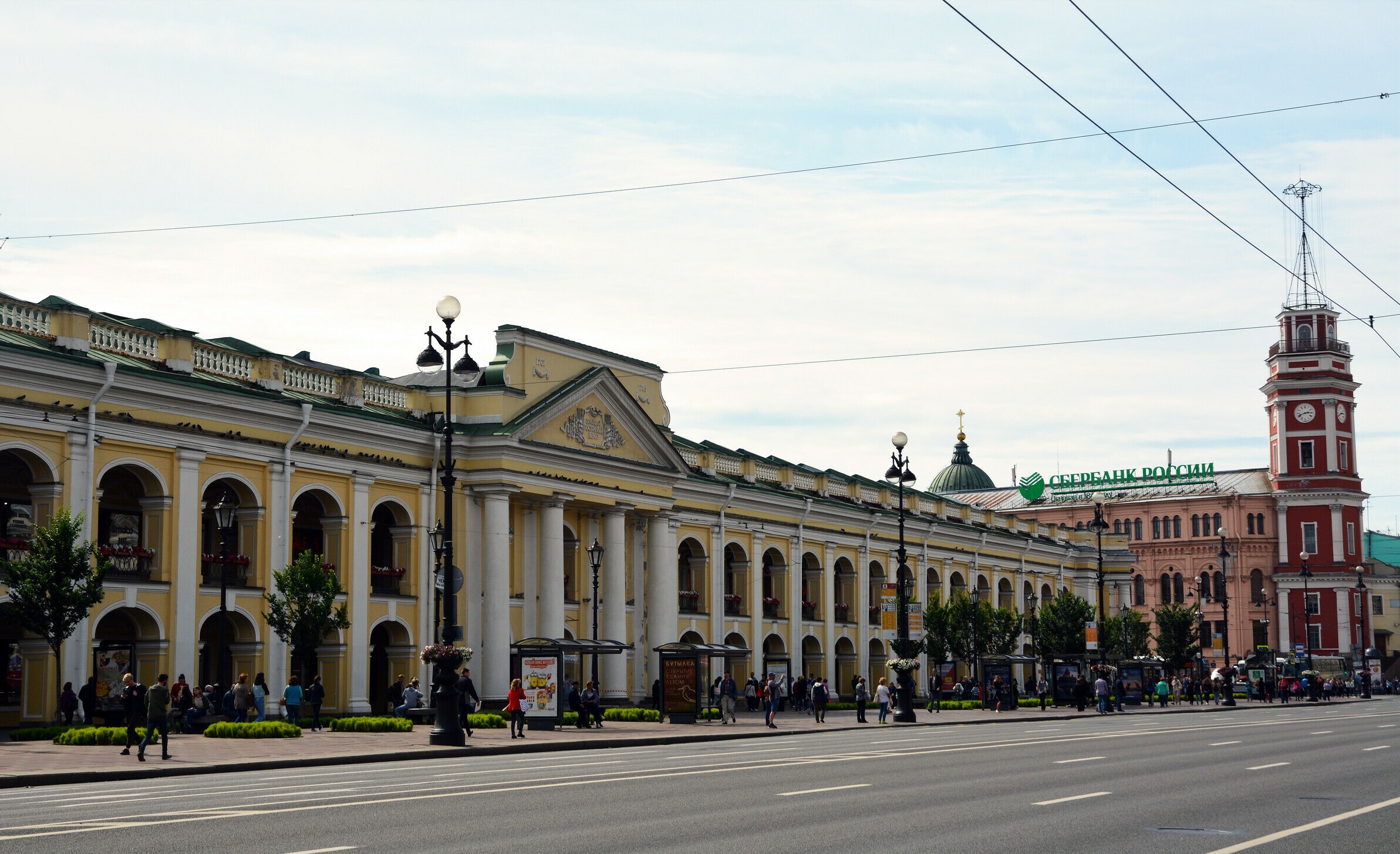 Bytheway, right across from Gostiny Dvor there is the Basilica of St.Catherine, which gave its name to the Catherine Art Hotel. TheBasilicawasalsocreatedbyVallindela Mothe, and if you try you can notice certain similarities between the two of them. But of course, they both were created by the same Master.

Alas, French architect could not see his project completed. Hiscontractwith the Academy of Fine Arts, where he worked as a professor, expired in 1775, and he decided to return to France. While constructionofGostinyDvorwas finished in about 10 years after he had left.

As they say, the enterprise quickly became popular. There was everything in Gostiny Dvor –manufactures, haberdashery, perfumes, fabrics and jewelry. And unlike today, books were much sought after, by the way. It was there, in the shop of the merchant Zotov, that the first copies of “Journey from St.Petersburg to Moscow” by A.N.Radishchev were sold…but that’s another story. 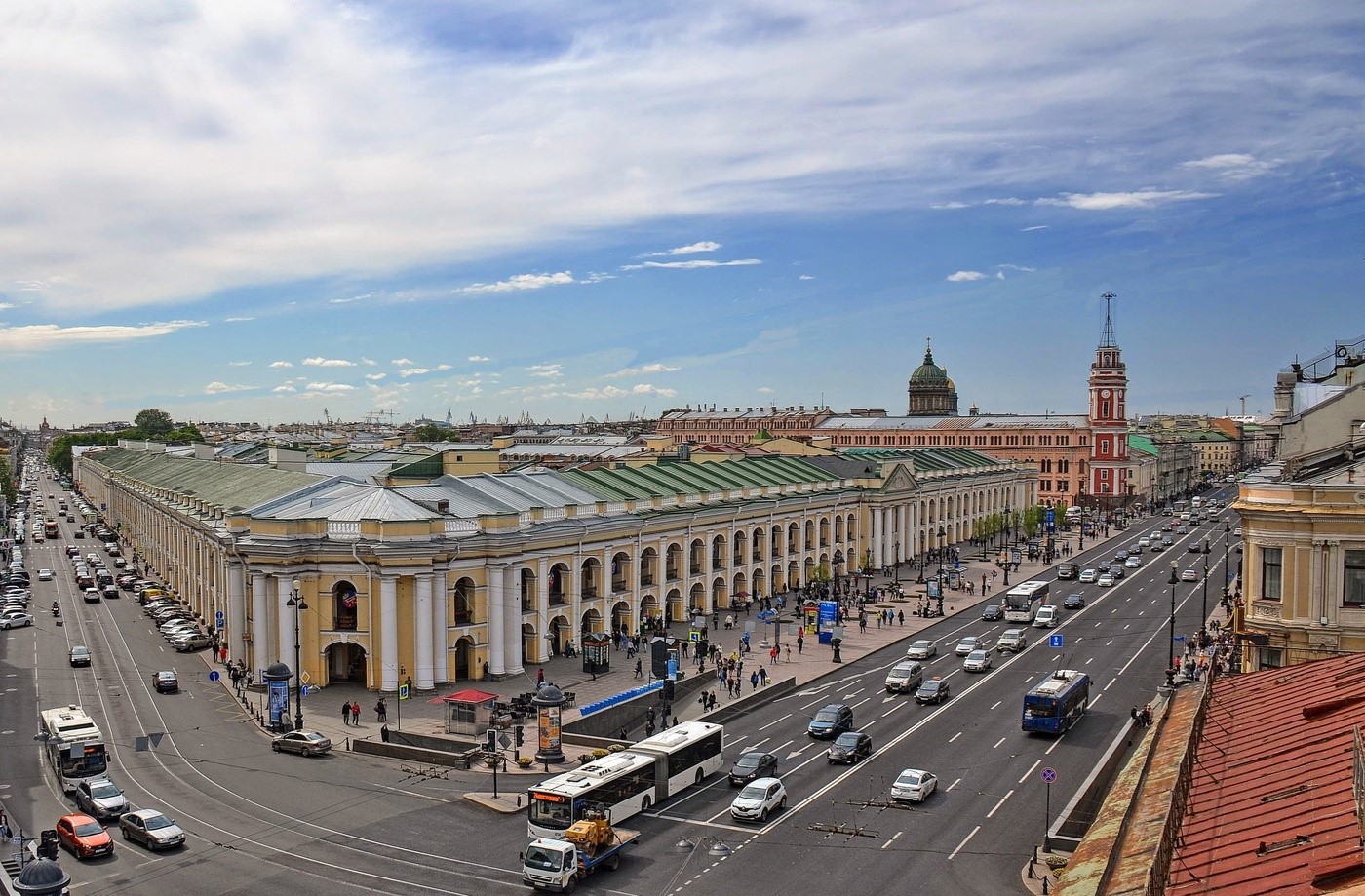 Already at the beginning of the 19th century, Gostiny Dvor was considered not only a perfect shopping place but also a place where one could see other people and be seen by others.One of the contemporaries called it “a real show of the future brides”. Some shop owners even complained that a lot of people came to Gostiny Dvor to have a stroll and to meet with acquaintances, and not to buy something…

And the solution was found – they decided to raise the prices in order to scare off those who werecoming there just to promenade. Paradoxically, it produced an opposite effect! They started selling more! Thus, they have discovered one of the main principles of how to increase demand by means of transferring the goods into the “premium merchandise” category. You see? And you were saying that Russians did nothing for business development. Andinfact, they did, didn’t they?

GostinyDvorwas rebuilt several times during almost two and a half centuries of its existence. But there is something that has never changed. ItisstillthewidestpartofNevskyProspect – 58 metres. Anditisstilla perfect and a very popular place for shopping and meeting with friends

“Brother hailed a taxi. We went to Gostiny Dvor and stopped by the department of electronics. Brother disappeared behind the counter with some Mishanya. When we were leaving, he handed me his hat and said, “Now it’s your turn. Put it on.” I waited, then moved to the kids department. I recognized my former classmate, Lyova Girchovitch in a shop assistant…” (S.Dovlatov, “The Suitcase”, “A Winter Hat” story)