I would like to begin my story with an excerpt from the lyrics to a beautiful song “A Walk along Nevsky” by Alexander Rosenbaum. And that’s what we’ll do!

“…and the opposite Yard’s full of various guests,

Who are there to chase their dream,

But State Duma is wise and therefore it requests

The Cathedral to be separated from them…” 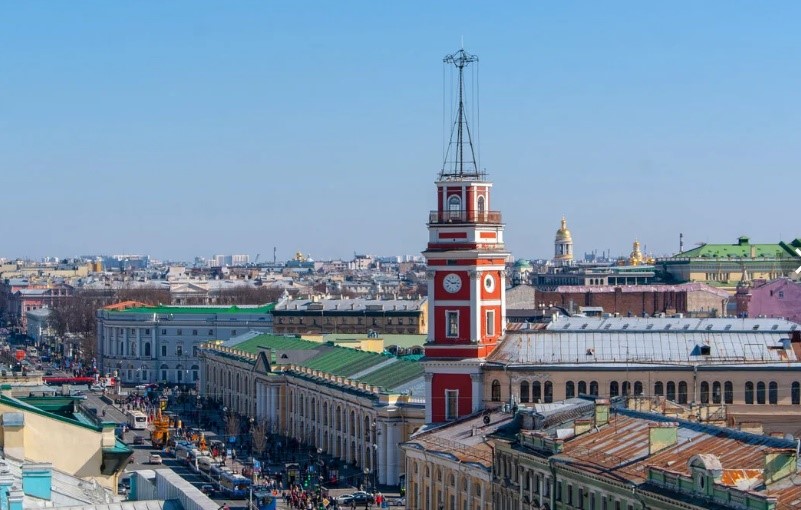 And now – a couple of “geographical clues” for visitors to St. Petersburg:

The Yard is GostinyDvor (The Merchants Yard), of course. Our last half-an-hour excursion was about it. It has been an undisputed flagship among St. Petersburg stores and a centre ofahecticworldly life since 1785. As regards the Cathedral (the author is referring to the Cathedralof Our Lady of Kazan), it is a centre of spiritual life. So, it makes sense to “separate” them. That’s what Alexander Rosenbaum is singing about, among other things. And the poetic task of separating them is performed in the song by the Tower of the City Duma.

By the way, it so happens (perhaps not incidentally) that one of Rosenbaum’s signature pubs is located in the City Duma building. And it is called... (AlexanderYakovlevitch, there could be your advertisement here –so, it’s nothing personal, it’s business!)

Now, I would like to make two brief historical remarks. The first remark concerns time: actually, the Tower of the City Duma was put up in 1804, several years earlier than the Cathedral of Our Lady of Kazan, built in 1811. It does not change anything, though. 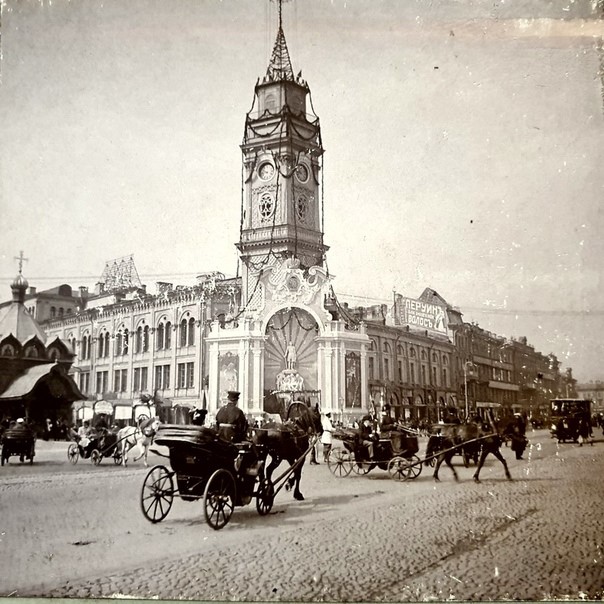 The second remark is as follows. For the sake of the rhythm, Rosenbaum raised the rank of Duma. It was only in 1905 that the State Duma appeared in Russia, and it sat in Tavrichesky Palace. And the building in Nevsky was the seat of the City Duma.

But the City Duma is older than the State one. It appeared in 1786 as per “The Letters Patent for the Cities” granted by Catherine the Great.Soon Paul I ordered that a special building be constructed for the City Duma. Unfortunately, he could not see the work completed, as he had died of a stroke three years before that.

As regards location for the building, it definitely was not selected at random. Starting with 1752, there had been located on the corner of Nevsky Prospect and the present DumskayaStreet thePublic Building of the Guild, a kind of a precursor of the city government.

Frankly, it is quite difficult to write about any outstanding architectural features of the building designed by Giacomo Ferrari, as there are very few of them. Some other sectors of economy brought glory to the name of Ferrari, after all. Car manufacturing was one of them, but it was some time later.

Only cross section of the Tower is unusual. It is a pentahedron, also a kind of “Five Corners”. The position of the Tower is quite unusual too: in fact, the Tower connects two buildings, thus forming the corner of Nevsky Prospect and Dumskaya Street. While towers of European city halls, created for the similar purpose, mostly formthecentre of the architectural composition.

Guidebooks advise us drily that “the buildings were remodelled and reconstructed more than once”, and that is probably the best “hidden characteristic”. Nobody will often alter a good design, add new floors and then remove them again. There is a legend about a ghost of the engineer Kenel, who added one of the floors, still haunting the Tower.The ghost is walking around wondering, “What else do you find going wrong again?” But it so happens that if something goes wrong once, it can keep on going wrong for a long time! Obviously, that was just the case. 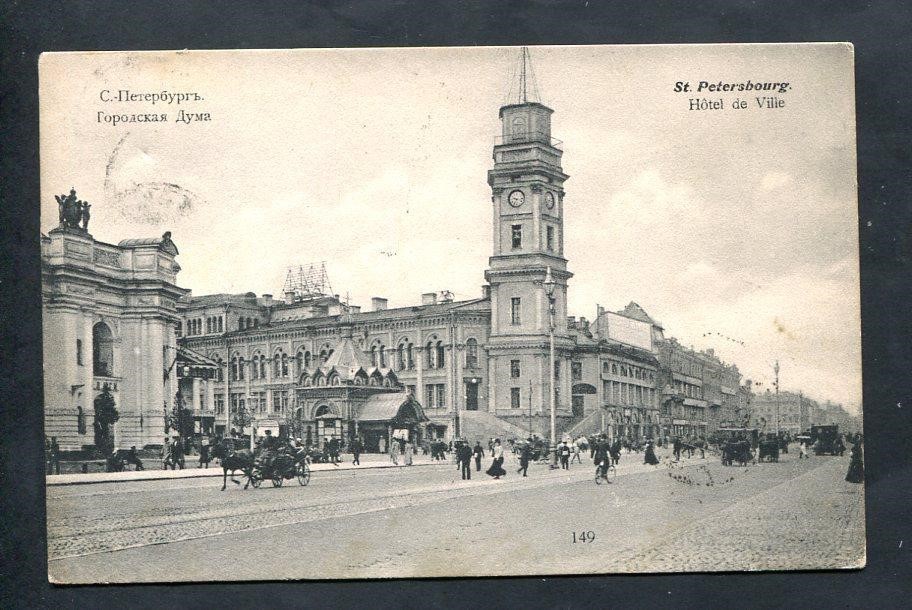 However, the Tower is doing a great job of being a high-rise dominating the middle part of Nevsky Prospect. And it is very interesting what is going on both inside and outside it.

Almost immediately after its construction, the City Duma Tower was used as one of the stations of the “optic telegraph”. Anoperatingprinciplewas simple: “flashing” from station to station, a signal traveled from TsarskoyeSelo to Warsawin 14 minutes! Warsaw was, as we all know, a regional capitalin the Russian Empire then. Thesignaltraveledmorethanathousandkilometres. Considering that Pigeon Post remained the fastest method of mail transportation at the time, 14 minutes was a perfect result.

Certainly, as any high-rise, the Tower was also used as a fire tower. Metalconstructionsontopof it were not purely decorative, but had practical value: they were used for raising fire signal balloons.

In the hall for general meetings, lectures of the “Free University” were held, and among lecturers there were Mendeleev, Sechenov, Beketov and many other outstanding Russian scientists.

Also, concertsorganized by the Russian Musical Society took place in the hall. Among those giving the concertsthere were – Rimsky-Korsakov, Mussorgsky, Balakirev and other great Russian (and not just Russian) composers.

And besides, there read their works Dostoevsky, Blok, Yesenin…

Afterrevolution the building housed Commissariat of the National Economy, engaged, among other things, in installing workers in the apartments of their previous well-to-do occupants. We are not going to touch upon legal issues now, we will just note that that’s where famous St. Petersburg communal flats come from.

And of course, all the visitors to St. Petersburg want to know if it is possible to go up the Tower! 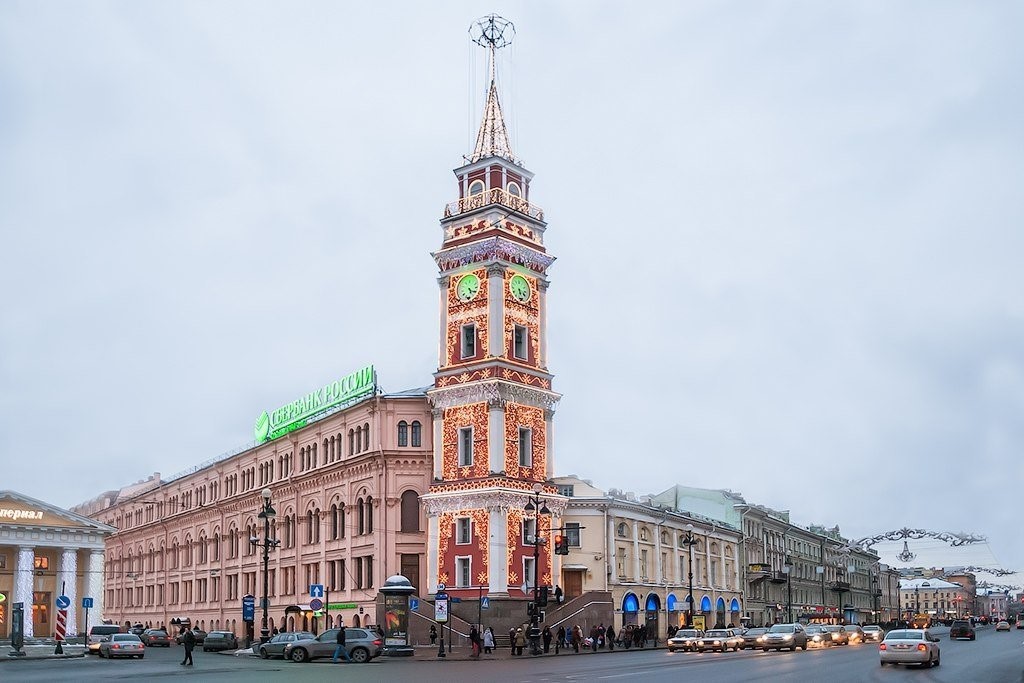 Itis amazing, but some legal confusion and not the best technical condition of the Tower inherited from Soviet time did not allow to use it as a tourist attraction. Butonedayalltheproblemsweresolved and since autumn 2021 the Tower has been open to visitors.

Thereisanother great alternative though – to become a guest at the Catherine Art Hotel, located across Nevsky Prospect in #32-34. Available for the hotel guests is an observation deck on the hotel roof. The views are fantastic! You will see St. Petersburg that you probably have not seen before!

Well, since we started the story with an excerpt from “A Walk along Nevsky”, we will finish it in a similar way.

“…Find me, if you decide to meet with Nevsky again!”

That is true. Songs by Alexander Rosenbaum are at the same time an excellent lyrical guidebooktoSt.Pete and Nevsky. So, we are going to come back here, that’s for sure!