It is beautiful, that is obvious. And it is very unusual. It both fits harmoniously into the ensemble of Nevsky Prospectand sticks out daringly in the best possible way.It looks modern even now, although it is going to turn 120, but thenit is quite young by the standards of Nevsky. 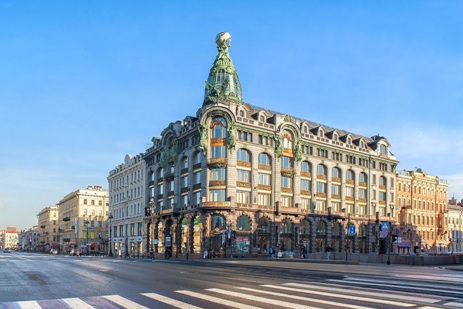 Having seen it for the first time, one wants to find out “when”, “who” and “why”: when it was put up, who the architect was and why it was built…

And that is a very interesting story! We will certainly tell you about the architect, engineering innovations and what was there in different periods of time,but we will do it later.And today’s topic ishow it came into existence.

Many visitors to St.Pete wonder, having learnt about the name of the building, “Singer Building”? Listen, is that theSinger of the Singersewing machines?” Yes, exactly. The most well-known Singer in the world (there is another one, though – Victor Singer – the goaltender of the USSR national ice hockey team).

Originally, it was a representative office of Singer Corporation in Russia, built in 1902.

“Really? Just sewing machines? Wow, they surely did it on a large scale!And look where it is located! Not every major domestic manufacturer would be allowed to put up an office building in Nevsky Prospect!”

Exactly! “Nothing more than” sewing machines, if we may say so. It’s just that we, who live in the XXI century, and who mostly wear clothes made by the Chinese and Turkish peasants, can hardly imagine what a breakthrough it was – appearance of a sewing machine which was both well-working and affordable.

Itwas, withoutanyexaggeration, an event that has changed the world forever.Singer sewing machine did pretty much the same as the Internet that has irreversibly changed our lives once it got into our mobile phones. Dressmaking productivity increasedmanifold, now almost every housewife could provide her large family with clothes. They say that following the ubiquity of Singer sewing machines, the famous women’s phrase “And I have got nothing to wear!”,widespread in the high society, was picked up by the middle-classwomen.Dressmaking became easier, more fun (and much faster) – and, really, there has been nothing to wear ever since.

Well, as we have mentioned smart phones, we should say that Singer Corporation at the end of the 19th-beginning of the 20th century can be compared to Apple Inc of today! Who could afford to have a representative office building put up in the centre of Nevsky Prospect today? Well, maybeApple could(evenGaspromcouldnot)! And back then it was Singer Corporation who managed to do it.

Contrary to popular belief, it was not Isaac Singer who invented a sewing machine. They had already existed before, but they were extremely uncomfortable, unreliable and inefficient. Singer can be credited with perfection of quality and invention of a number of important parts. In Singer sewing machine,needle stopped “running in circles”, shuttle took up horizontal position, treadle spared a hand of a seamstress from having to permanently rotate the handle, and as they say, the process was under way.

Besides, Singer introduced lots of new business ideas and solutions. In particular, Isaac Singer was the first to apply the system we now call “franchising”.

So, Singer Corporation flourished. It had lots of money and was very active in Europe. And when a question aroseabout capturing a very promising Russian market and building a representative office, the solution was obvious - it must definitely be in St.Petersburg; it’s the capital, isn’t it? And, of course, it must be in Nevsky Prospect, in the very centre! Adesignmust be the most fashionable and modern one! It’s Singer Corporation, isn’t it! Andtheworkhas begun!

Asregardsfurther developments, we will leave those for the next story.

Singer Building. No28, Nevsky Prospect. For the visitors to St.Petersburg: “Nevsky Prospect” and “Gostiny Dvor” metro stations, corner of the Nevsky Prospect and Griboyedov canal. 5-minutewalkfromGrandCatherinePalace, No32-34 NevskyProspect