House of Sergei Dovlatov - a recognized classic of the XX century

Today, Sergei Dovlatov is a recognized classical writer, one of the best Russian authors of the XX century. He is a truly “Leningrad” author too, as he spent more than thirty years of his , sadly, not very long life here, in Leningrad. He wrote, “ My nationality – Leningrader, my patronymic –of the Neva”. 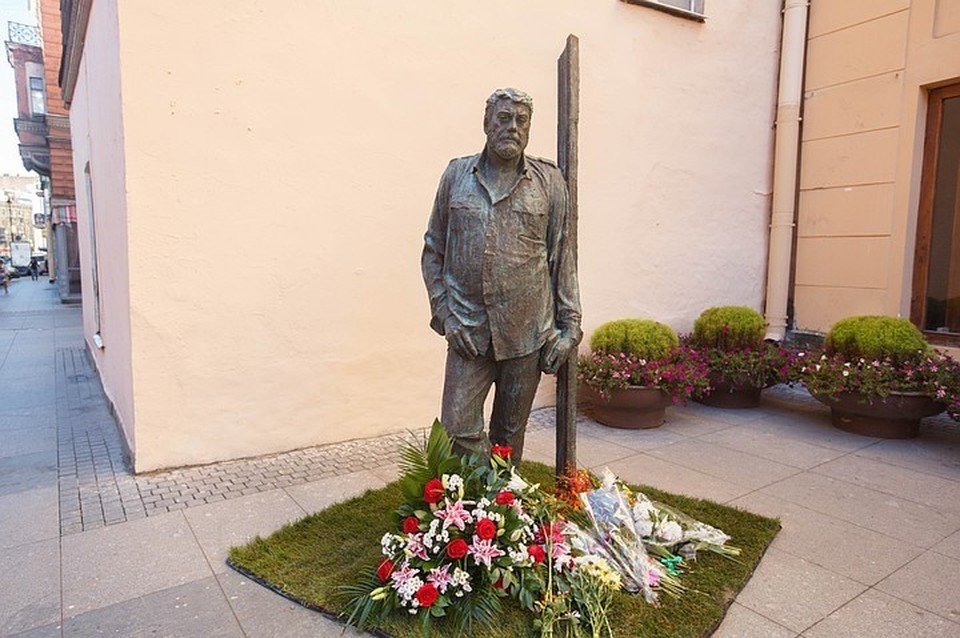 Surely, long-standing admirers of Dovlatov’s creative workcan easily name his locations in St. Pete.Butour short “Dovlatov guide” is meantfor those who have only recently discoveredDovlatov. So, we invite you for a tour of Dovlatov’s places in St.Pete, andquotes will be our best companions, because many spots in St.Pete amazingly come to life on the pages of his books, and at times it seems that the characters of his stories are about to come up and talk to us!

As it happens, for example, with the corporals Gayenko and Ryabov in the story “Soldiers in Nevsky”, “The itinerary is as follows. First of all, we are going to the Hermitage, of course. Then –to the Bronze Horseman, after that – to Peter-and-Paul Fortress, and at the end – toTretyakov Gallery…”. Isn’t it a perfect idea of a walk?The brave corporals walked the whole of Nevsky indeed, “back and forth”, yet, they finished not by Tretyakov Gallery, but in a communal flat in Ligovsky Prospect.

“Once I am discharged, I will be walking around the city for hours on end. I will drop in at a café in Marat Street. I will have a smoke by the City Duma in Nevsky…” (S.Dovlatov, “The Suitcase”, story “Leather Officer Belt”). Here you are, another short route!

Anyway, we should certainly begin with an apartment building where the Dovlatov family used to live. ItwasanordinarySt. Petersburg apartmentbuilding – No 23, RubinsteinStreet. «We lived deep in the backyard in the building without a lift, on the fourth floor;there was about a hundred metres from the gate to the front door…” Today, there is a memorial plaque on the building and even a monument to the writer nearby. The place is located within easy reach from the Catherine Art Hotel, a walk or a short bus ride along Nevsky towards Vosstaniya Square will bring you to Rubinstein Street (“Liteyny Prospect” bus stop), which starts right from Nevsky. 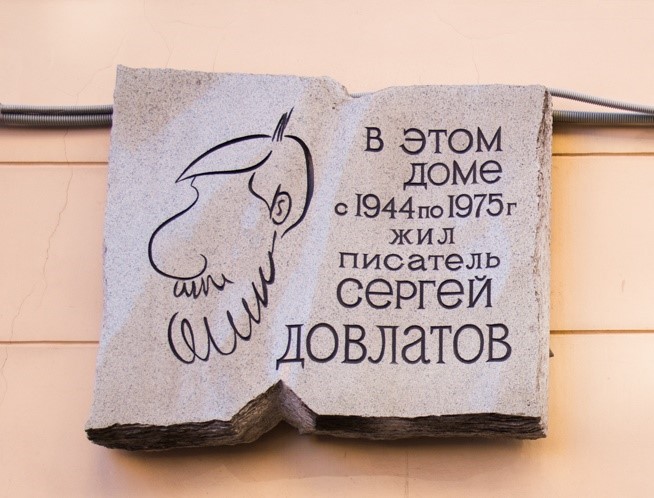 The school Dovlatov went to is not far away too – No 62 Fontanka Embankment. It was there that the future classical writer made his first steps in literature. «Theyear 1952. Iam sendingfourpoemstoanewspaper. One of them is about Stalin, of course. The other three are about animals. My short stories are published in the children’s magazine “Kostyor” (The Campfire) for the first time. They resemble the worst pieces by mid-level professionals…” (S.Dovlatov, “Craft”).

By the way, the memorial plaque on the apartment building No23 in Rubinstein Street is not the only one. There is another plaque located in the State Marine Technical University, called “Korabelka”. ThereSergeiDovlatovstartedout on hiscareerasajournalistina wall newspaper with a romantic title “For the Staff for Shipyards!”. The address is No 3, Lotsmanskaya Street, which is quite far from the city centre.So, pleasesimply know that such place exists.

Those who are just beginning to read Dovlatov often ask if heused to go to café “Saigon” in Nevsky. Of course, he did. Hesimplycouldnothelpdropping by “Saigon”, asit was visited by everyone, without exception! And although he did not find any kind words for “Saigon” of his time, he still left us the following description, “An unclean café in the centre of St. Pete, on the corner of Nevsky and Vladimirsky, with kind of strange – bohemian and, at the same time, criminal – clientele. They used to meet there, drink coffee and port, exchange news and recite poetry, of course…”

Surely, a beginning writer preferred get-togethers at the restaurant “Vostochny”, located not far from the “Europeiskaya” hotel in Mikhailovskaya Street. ItwasBrodskyStreetthen. Mind you, it was named after the famous Soviet artist Isaac Brodsky, and not after Joseph Brodsky, a poet and a friend of Dovlatov.“There was a fantastic literary community in Leningrad in the sixties. We met very often and talked a lot. There was that restaurant, called “Vostochny”, it was a kind of Leningrad Montmartre of that time. Dovlatov and I quickly noticed each other,and became friends…” (from the memoirs of the Leningrad writer Valery Popov). 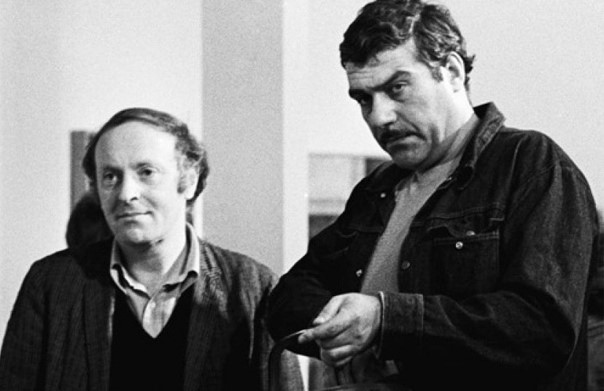 While we are inMikhailovskaya street, it might be a good idea to walk as far as Belinsky Street, to that place where there used to be a beer kiosk, literally celebratedby Dovlatov! “A painted green kiosk is standing on the corner of Belinsky Street and Mokhovaya Street. The queue stretchesaway along the lawn as far as the District Food Trade Organization.People are crowded at the counter. Farther away, the crowd is getting thinner…I am in line after a bald man, Tsar is right after me, so you will be right after Tsar!..” (“The Suitcase”, story “Driver Gloves”). The time will come and we will tell you about the kiosk and the surrounding area!

And one more place–Leningrad State University on Vasilievsky Island, The Faculty of Philology, where Dovlatov studied and where he was expelled fromfor poor academic achievement due to unhappy love. Thatstoryis one of the plotlines of the novel “Affiliate”, his last large work which was written in 1986.

And one more place - “Lomonosovskaya” metro station, where another story from his novel “The Suitcase” takes place. Well, again, those who are just beginning to read Dovlatov believe that it is a fiction, but it is not! Ithasbeendocumented, andnotjustin the memoires of his friends of Leningrad period, that the future famous writer worked in the team of stonecutters.

And one more place – “My brother and I met in Tavricheskaya Street. We stopped by a grocery store and bought all that was necessary…” The reason why the brothers met in Tavricheskayawas that both Leningrad branch of the Writers’ Union and the Editorial board of “Kostyor” (The Campfire) magazine were located nearby. And while Dovlatovwas never admitted to the Writers’ Union, it did not stop him from working in a children’s magazine. So, when you are in Tavroicheskaya, be sureto stop by a grocery store, as it may turn out to be that same store. Shops as well as places to eat in St. Pete have extraordinary staying power, many of them date back to very long ago! 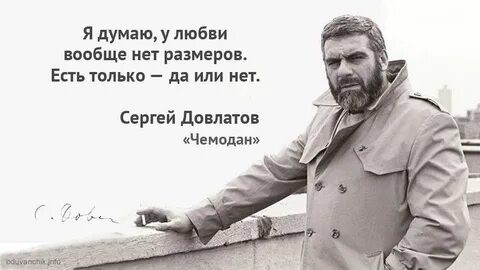 On the second floor of the Catherine Art Hotel there is a small library. And one of the authors, thatour hotel guests seek after most of all,is a Leningrader Sergey Dovlatov. So, we are looking forward to seeing you at our hotel, and hope that you can discover St. Pete and great books, in case you have not done it earlier for some reason.

CatherineArtHotelisahotel, located in the heart of St. Pete, in the centre of Nevsky. And – oneofthefavouritequotes of our hotel guests is the following:

“Writer Golyavkin often visited a barroom near St. Isaac’s Cathedral. Each time he was there, hewould calluphis wife from a public phone booth and, when asked where he was, he would say,

One day his wife could not stop herself from asking,

“What is it you are doing there all the time? As if you were Montferrand, huh!...”