St. Petersburg is a multinational city.

It has been multinational from the moment it was born. And that is quite natural, as it was built by the best masters from various countries. Actually, a short walk along Nevsky is enough to see it. On the left-hand side of the prospect,you will see a German cathedral of St. Peter and St. Paul (No22-24), then, further on – a Roman Catholic cathedral of St. Catherine (No32-34), and still further on – an Armenian Apostolic Church (No40-42). However, our today’s story is about the Catholic cathedral of St. Catherine to which Catherine Art Hotel owns its name. And another reason why we have chosen St. Catherine’s cathedral for our story is that several outstanding architects participated in its construction. 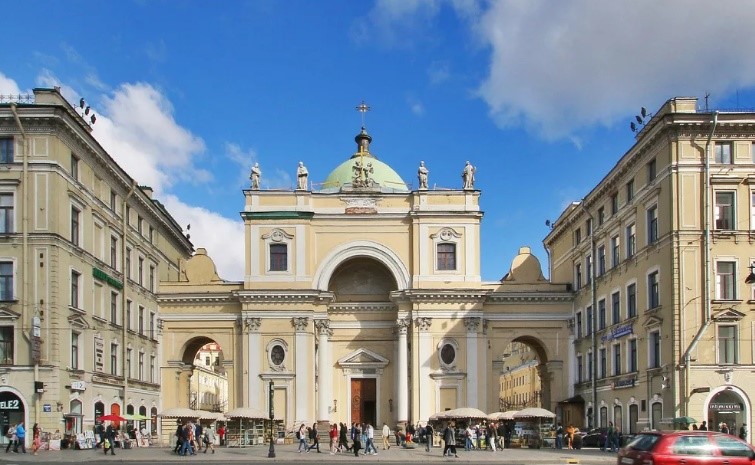 An “official name” of the cathedral is Basilica of St. Catherine of Alexandria, and that is the only basilica in this country. In fact, while we (or at least some of us) think that “basilica” is an architectural term, it is actually not. In Roman Catholicism, “basilica” is a kind of a “higherchurch”. An archpriest in charge of a basilica is higher in hierarchy than an “ordinary priest”. Designation of basilica may be made by the Pope. All in all, it is really the only basilica in Russia.

The place where it is located was given to the catholic community of St. Petersburgin 1738 by the order of the empress Anna Ioannovna. Soon, a temporary wooden prayerful house was constructed, and a little later an architect Pietro Trezzini presented a design of a stone church. (Mind you, it was not Domenico Trezzini, the author of the St. Peter-and-St. Paul Cathedral, but his namesake Pietro Trezzini, who was much younger than Domenico.)

The project by Pietro Trezzini was never realized. To be exact, it was not realized to a great extent. Three-storey buildings on both sides of the future cathedral were put up according to his plan, but the cathedral itself…

Right, you have just read “three-storey”, though the buildings we see today have five storeys each. Even those who are not into architecture notice that the cathedral looks kind of lost between them. 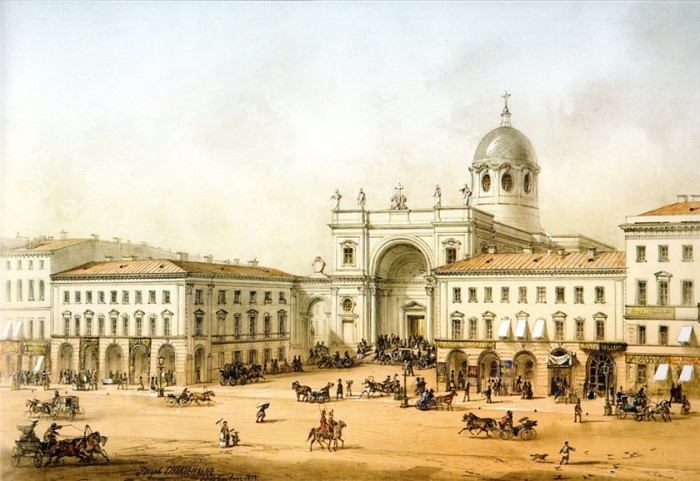 That’s true, but it is not unusual for St. Pete. Sooner or later, almost all the buildings in Nevsky got higher due to dictates of time. There was nothing to be done, as it was not only about architecture and proportions of architectural ensembles, but also about the cost of a square metre of land on the main thoroughfare of the capital. So, those two buildings, which kind of supportedthe cathedral on both sides, became two storeys higher too. But the original idea of an ensemble - a cathedral surrounded by two buildings - looks quite harmonious.

New design, though it was based on the original plan by Pietro Trezzini, was made by the French architect Jean-Baptiste Vallin de la Mothe. Yet, he also was not destined to complete his work. Due to some reasons, construction works were stopped in the middle of 1760-ies. Lack of financing is not just the problem of today, it happened beforemore than once.

Another ten years had passed, and the third Chief Architect proceeded with construction works. That time it was Antonio Rinaldi. Having simplified the design by Vallin de la Mothe, he practically managed to roof the building.

So, it is quite logical that one of the façade decorations is “a flower of Rinaldi”, which was a kind of an autograph thatthe architect placed on his creations, and each autograph was unique. 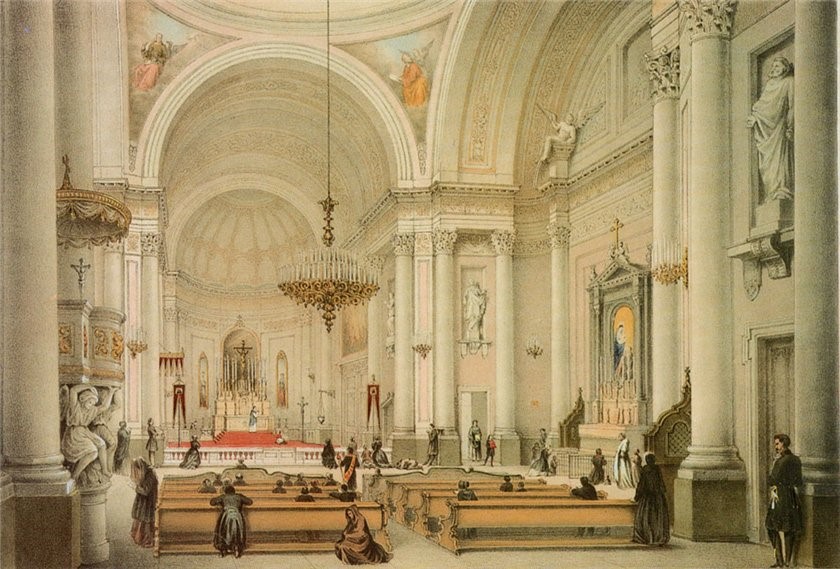 By the way, “a flower” is not the only “signature” of the architect. According to the canonic legend, maestro Rinaldi suffered from an unrequited love for an actress of a serf theatre, so much so that he gave her facial features and her characteristic gesture (a slightly upturned index finger) to some of the sculptures, decorating the secularbuildings that he designed. Surely, the architect could not afford that kind of frivolity when putting up a religious building and marked his participation with a flower bearing his name.

Was it that feeling that made Rinaldi return to his motherland one day? The authors of the legends are holding back on that. But the fact is that Rinaldi was not the last architect who worked at the cathedral. The last architect in charge of the construction works, completed in 1784, was Giuseppe Minchaki.

In 1858, the burial service for Auguste de Montferrand was read there. And again, according to one of the legends, one of the reasons why construction of St. Isaac’s Cathedral lasted so long (40 years) was the prophecy given to Auguste de Montferrand one day. The prophecy said that he would die as soon as the cathedral was built. We will hardly find out if the prophecy really existed, but it is an established fact that the famous Frenchman died a little more than a month after consecration of St.Isaac’s cathedral, which became the main cathedral in St. Petersburg.

And in 1840, a U-shaped building was put up behind St. Catherine’s Cathedral.Located in the premises of the building there were living quarters for the clergy and employees of the cathedral; a church school for boys opened in 1769 when construction works were still in progress; a church library containing more than six thousand volumes; and a church orphanage.Actually, that is the building where Catherine Art Hotel is situated. You will notice authentic brickwork in many of the guest rooms! 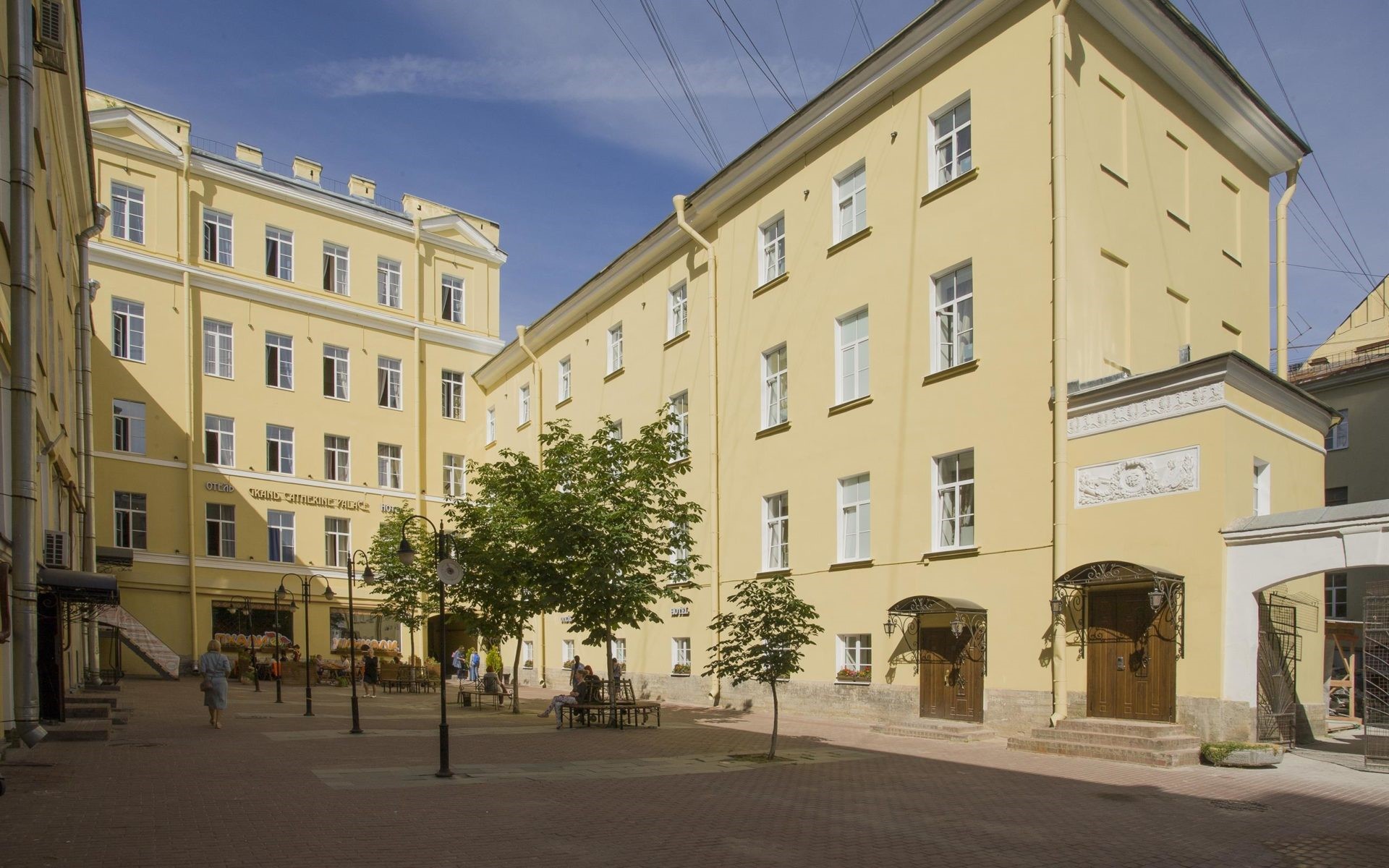 After the October revolution, the cathedral remained a place of worship for almost 20 years. In 1938 it was closed and its premises were used as storage facility and as an administrative office of the Museum of Religion and Atheism. In fairness it should be noted that the first restoration works started in the cathedral in Soviet times. It was intended that the organ would play in the cathedral again. Acoustics in the Basilica of St. Catherine was considered one of the best in Europe by music connoisseurs. Alas, as a result of the fire of 1984 all the restorers’ efforts were brought to nothing. So, it was only in 1992 that the cathedral was finally returned to the Roman Catholic Church, and in 2008 its restoration was practically completed thanks to the efforts made by a great number of people.

That is the story of one of the most beautiful buildings located in the very centre of Nevsky Prospect. And we made it really short! And it means that we are surely going to come back to it.

Today it is an active church. A small place in front of it is one of the favourite locations of St. Pete street artists, which is natural as it provides more space because the cathedral “steps back” from Nevsky Prospect a bit. In fact, that was how Pietro Trezzini planned it, and we, the artists, are forever grateful to him for that!

History awaits you right at our threshold!